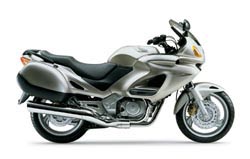 The trip to Rovinj, where the RedBull Air Race was held, was re-planned to moto-trip instead of sharing the comfort of a car. The machine which whisked me there and back again is 13 years old travelling 650ccm engine with two wheels, some plastic parts around and three cases for necessary staff (photography things mainly :)

The city of Trieste greeted me with dozens of scooter-girls and scooter-boys almost like in Vietnam (also the same friendly tolerance on the road which we unfortunately lack here in CZ). Rovinj on the other hand is a small Venice-type village when compared to Trieste. The way back was gas-station-to-gas-station experience with longer stop near the Linc and after more than 13hours I was back home.